The best comedy of the fall is………. Trophy Wife. What? Trophy Wife, really? Yes, this is the best new comedy that no one is watching. I would put it up there as one of the top comedies on television right now.

Trophy Wife is a show about a newlywed couple, played by Malin Akerman (Rock of Ages, Wanderlust, Children’s Hospital) and Bradley Whitford (West Wing, Cabin In The Woods). The series delves into their daily lives dealing with his two ex-wives, Marcia Gay Harden (The Newsroom, Mystic River) and Michaela Watson (Saturday Night Live, Afternoon Delight, Wanderlust) and the three children from his previous marriages. 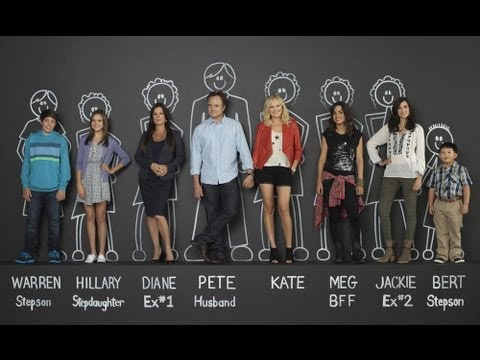 The title Trophy Wife might turn some people off. I beg of you – don’t judge a show by its title. Many wonderful shows have suffered from a title that ended up not representing what the show is actually about (see The Good Wife and Cougar Town).

I can’t stand TV kids. THEY RUIN EVERYTHING and are just annoying in general. But these kids are incredibly funny

This show starts off as a traditional sitcom, but in the 6 episodes that have aired since the pilot, it has become so much more. The acting from the entire cast is great and the characters have more going for them than your usual one dimensional archetype of a sitcom character. On your typical sitcom, you would think that because there are two ex-wives the audience is meant to hate them because they would be normally be written as hateful characters; but that’s not what you get from the show. NPR’s Linda Holmes said it best when she claimed, “Trophy Wife manages to show both how Whitford could have been married to his previous wives and why he no longer is.” Spot on sister.

Even the kids on the show are funny and if you know anything about me or have seen any of my Twitter rants, you know I can’t stand tv kids. THEY RUIN EVERYTHING and are just annoying in general (see Dana Brody from Homeland and Grace Florrick from season 2 and 3 of The Good Wife). But these kids [Bailee Madison (Hillary), Ryan Lee (Warren) and Albert Tsai (Bert)] are incredibly funny. My favorite character on the show is Bert, the Chinese adopted child from the second marriage of Pete. While this might bring to mind the Vietnamese adopted child, Lily, of Cameron and Mitchell from its sister comedy, ABC’s Modern Family, there could not be more difference in these two child characters. Where I find Lily to be kind of obnoxious and a little insufferable. While she has her moments, I like Bert better. He’s smart, sarcastic and just plain funny. The kid’s comedic timing is so good that I laugh the most when he is on screen. Tsai just plays so well with the adults and hits all the right notes.

Comedies usually take a long while to find their footing. Some succeed (Parks & Recreation, New Girl, Brooklyn Nine-Nine) while others falter (The Mindy Project is still trying to figure out what it wants to be. It needs to get it together quickly because I’m scared it’s not going to make it after this season). Trophy Wife defies that generality, in that it found its footing rather quickly and only continues to get better.

So please if you are a fan of Modern Family or a fan of laughter, then you would only be doing yourself a favor by tuning into this show on Tuesdays at 9:30pm/8:30c on ABC or catching it on Hulu or ABC.com. And don’t worry about it suddenly getting cancelled; ABC did the right thing and picked it for the full season (22 episodes). But it must get picked up for a season 2 and so I need everyone to get to it and start watching.

3 thoughts on “Why Aren’t You Watching Trophy Wife?”