Lots premiering tonight. Many NBC shows are back as well as an award show and a couple of big dramas.

One Tree Hill (CW) – Final Season Premiere. Haven’t really watched this show since Chad Michael Murray and Hilary Burton left but it was one of my guilty pleasures. Only a hand full of people knew I watched this show. Anyway this is the premiere of the ninth and final season of this show. So fans of this show get to watching. There are only going to be 13 episodes this season.

Whitney (NBC) – Winter return. New time slot. Many people hate this show. I don’t hate it but I don’t like it either. I don’t know why I watch this show because it really isn’t funny at all but I like Whitney Cummings and feel like I should support lol.

Are You There, Chelsea? (NBC) – Series Premiere. I love Chelsea Handler and love the book this show is based on. That being said I don’t know how well this show is going to. Laura Prepon (That 70’s Show) plays a 20 something year old Chelsea Handler, while Handler herself plays her older sister, Sloane.

The People’s Choice Awards (CBS) – The Big Bang Theory‘s Kaley Cuoco is the host for the night for this awards show which like its name says is voted on by the people or 13 year old children.

Harry’s Law (NBC) – Winter return. This show is an ok show. I like some of the cast members but it just seemed really boring so I stopped watching last season. Tonight’s episode has Adam and Cassie represent a troubled woman who exacts vigilante justice against men who abuse women by dressing up as Wonder Woman. 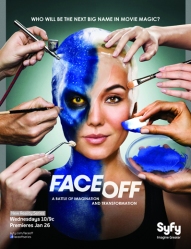 Face Off (SyFy) – Season Premiere. Never watched this show before but I just discovered that such a show exist. I shouldn’t be surprised. There is a reality show for pretty much everything. This show has a bunch of prosthetic makeup artists compete to create prosthesis like those found in horror and sci-fi movies. The challenge for this episode is to re-imagine the characters from the movie, The Wizard of Oz.

The Challenge: Battle of The Exes Special (MTV) – YES!!!!!!!! I hate Real World now but I LOVE me a challenge. This time kind of like they did with Rivals at the last challenge, they have put exes together that were either serious relationship or just a hookup. There are some people on here that are pushing 40 now and were on the Real World and Road Rules in the late 90s and early 00s but I mean I wouldn’t work if I had no discernible talent and MTV kept sending me on paid vacations to exotic locales and giving me a bunch of money and prizes.

Law and Order: SVU (NBC) – Winter return. I haven’t watched at all this season. I just can’t get over the fact that Stabler (Chris Meloni) isn’t there anymore. I’ll catch it at some point. USA runs marathons of this show all the time. Tonight’s episode, the team tries to investigate the rape of an actress in an interactive theater production that happened on stage, that the audience believes is part of the show. They hit a dead-end in their investigation when they learn the show’s director gave the audience — including the assailant — masks to wear during the performance.