More premieres and returns tonight. NBC Thursday night comedies are back, well most of them (sorry Community fans), as well as CBS’ Thursday lineup. Also, VH1 has the Critics’ Choice awards. Soo much to watch and these are just the premieres.

Big Bang Theory (CBS) – Winter return. Sheldon gets in trouble with Amy when he isn’t impressed by her recent accomplishment, and Howard must come to grips with Bernadette’s dislike of children.

30 Rock (NBC) – Season Premiere. Love this show. It got pushed up to mid-season because of Tina Fey’s pregnancy but thank goodness its back. Too bad its at the expense of Community. Tonight’s premiere finds that as everyone is returning from the holiday break, NBC’s new talent competition, “America’s Kidz Got Singing”, is a hit, but Jenna’s role as the judge everyone loves to hate causes Jack to question the show’s family value. Much to his chagrin, Tracy’s usual antics fail to aggravate Liz, while Kenneth takes the day off to do his dream chores as he awaits the Rapture.

Critics’ Choice Movie Awards (VH1) – It’s the first big award show on the road to the Oscars. Plenty of stars will be in attendance and the fashion will be AMAZING as it usually is at these things. For the list of nominees, check out the Critics’ Choice website.

Parks & Recreation (NBC) – Winter return. Another show that is absolutely hilarious. I finally got to the end of season 1 and it seriously hilarious. Gotta catch up to the current season. On tonight’s episode, Leslie enlists everyone’s help in staging an attention-getting event. Ben explores a new hobby, while April and Andy adopt a pet.

Rob! (CBS) – Series Premiere. This show stars Rob Schneider and that should just about tell you all you need to know about this show. It looks awful. Almost as awful as the ABC show, Work It. Rob plays a guy who use to be a confirmed bachelor, but just recently married into a tight knit Mexican family. Here is a clip. 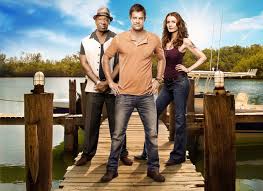 The Finder (FOX) – Series Premiere. This is a spin-off from the show Bones. It stars Geoff Stults (7th Heaven, October Road) as Walter, an investigator who uses his  gift of finding things (get it The Finder) to help others recover what they’ve lost.  Michael Clarke Duncan(The Green Mile, Talladega Nights) also stars as Walter’s lawyer. Here is a clip.

The Office (NBC) – Winter return. This show has been very hit or miss this season after Steve Carell’s departure. Mostly miss and I’m just hoping the they find their footing soon. On tonight’s episode, Oscar joins a trivia night contest, Andy decides to get the whole office involved. Meanwhile, Dwight visits Sabre headquarters to explore other job opportunities.

Person Of Interest (CBS) – Winter return. This show started off slow but it really picked up half way through the fall. They also put Taraji P. Henson in a lot more episodes so that also made the show even better. Tonight’s episode has Reese working the computer while Finch does the legwork with their latest POI, a building super who keeps too close an eye on his tenants. Meanwhile, Detective Carter may finally get her long-awaited glimpse into a case.

Up All Night (NBC) – Winter return. This show is hilarious. I thought it was ok when it started but it got better as the season went on. On tonight’s episode, Regan’s competitive streak surfaces during a New Year’s Eve game night, much to Chris’ chagrin. Meanwhile, Kevin suspects that Ava may be ashamed of him; and Missy shows up with a surprising date.

The Mentalist (CBS) – Winter return. Jane and the CBI team narrow down the long list of suspects after a high-end divorce attorney, with many enemies, is killed on his speed boat. Meanwhile, Jane is questioned by Agent Darcy about whether Red John was responsible for Panzer’s murder.