If you have followed this blog for any amount of time, you know I love television. You also know I LOVE FALL TELEVISION. The air begins to cool down, Starbucks brings back their pumpkin spiced flavor and all of my favorites and potential favorites come back from their summer hiatus. It’s the most magical time ever.

So here I’m going to wax poetic on what returning shows I am looking forward to as well as what new ones I hope are as good as their trailers seem. 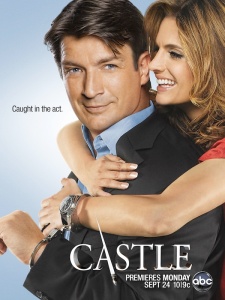 Season 5 is going to be amazing. Season 4 ended with the writers giving the fans what they have wanted for 4 long seasons and they definitely did not disappoint. Season 5 will start with the morning after of Castle and Beckett getting together as well as what happens with Esposito and Beckett after they quit the force. Hopefully we will get some mending of Ryan and Esposito’s friendship. Can’t wait for this one. The new season starts Monday, September 24 @10/9c on ABC.

Season 3 ended on a crazy note. Elena died but before that she chose Stefan over Damon 😦 they killed Alaric, Klaus got into Tyler’s body; just a whole bunch of crazy goodness. This season doesn’t look any different as the promo trailer shows. We get to see the gang (mainly Bonnie) try everything they can so Elena doesn’t have to be a vampire (where was all this fuss for Caroline when she was turned?) and more of Klaus in Tyler’s body getting it on with Caroline (I want Joseph Morgan back asap. He was so wonderful as Klaus). If you haven’t gotten on this show you show you have some time as it is getting a late start this year and premieres Thursday, October 11 @8/7c on The CW. All 4 seasons are on Netflix Instant watch, Amazon Prime and Hulu Plus.

AHHHH!!! Besides Castle, this is the other show I am looking forward to the most. Last season was just so spectacular. Kalinda was on fire, her ex-husband is coming back, Alicia is more than likely going to get back with Peter, Will got suspended just all kinds of wonderful, delicious, juicy goodness. Season 4 picks up from where we left with Kalinda sitting and staring at the door with the gun as she waited for her ex-husband to come for her. In the promo we see, GCB‘s Kristin Chenoweth playing a reporter asking Alicia some tough questions about her relationship with Peter (they have the best guest stars on television and they get used soooo well. Christina Ricci and Brian Dennehy will be some of the guest stars this season) and we also get to see that the tension between Will and Alicia is still very much there. Also Cary and Alicia are back to working together(I always liked their dynamic). From the looks of things it’s going to be a great season. Season 4 premieres September 30 @9/8c on CBS.

Last season Shonda Rhimes notched another hit under her belt with Scandal, the show that came in during the mid-season and in 7 episodes had people going nuts. For me the show started off ok. Acting was good (with some exceptions) and it had a good story but then it got better and better and by the finale I was most definitely hooked and coming back for more. Season 2 doesn’t look any different. What’s Rhimes got up her sleeve this season? Hopefully some people start getting theirs like the Vice President’s Chief of Staff who killed the reporter and the president’s wife who stopped Fitz from leaving her and cutting off his relationship with Olivia. Season 2 premieres Sept 27 @10/9c on ABC.

I couldn’t decide between these 2 as they are very different show but bought are great (One is greater than the other but that’s for you to decide which). Revenge will be coming back with lots of questions that went unanswered in the finale. Are Lydia and Victoria dead? Is the white-haired man working with Emily? Where is Emily’s mother? Who is the real father of faux-manda’s baby? Will they keep Charlotte dead?(Please say yes). Why is Ashley so thirsty? Hopefully these get answered within the premiere, which will be happening on a new night and time (Sunday, September 30 @9/8c on ABC).

Homeland‘s season saw Claire Danes Carrie get axed by the CIA and go to get electroshock therapy for her bipolar disorder. This season is going to start with a time jump 8 months from the finale and will show Carrie trying to deal with her disorder and still trying to go after Brody, now a congressional candidate, and  prove that he was turned by al-Qaeda. It’s gonna be CRAZY!!! Can’t wait. Season 2 premieres Sunday, September 30 @10/9c on Showtime.

There aren’t very many new shows that I’m excited about. Compare that to last year when I was bursting with anticipation for all the new shows that were coming my way. This year I could only come up with 2 (I really wanted to get 5 but it just wasn’t happening).

I love me some Mindy Kaling. First of all, she’s Kelly Kapoor from The Office, who had some of the best lines on the show (she was also a writer and directed some episodes of the show), secondly, she wrote this hilarious book, Is Everyone Hanging Out Without Me? (And Other Concerns), which is no Bossypants but still held its own as far as comedic memoirs go. This show looks like its going to fit in well with the Tuesday night block of comedy that FOX has going on over there with New Girl and Raising Hope and should do well. The title is quite awful but hey if the show is as funny as I think it’ll be, who cares. The series premieres Tuesday, September 25 @ 9:30/8:30c on FOX.

I am looking forward to this show for one simple reason, Connie Britton. LOVE HER LOVE HER LOVE HER!!!! She will always be Tami Taylor from Friday Night Lights to me. She can do no wrong. Well American Horror Story ended not being so great, but I put that on Ryan Murphy and not on her. Again this show looks like that bad Gwyneth Paltrow movie, Country Strong but this time it looks like there might be a good story and some good acting there. I am also happy to see Hayden Panettiere back on television. She’s a good young actress that I’m glad to see back on my screen (She will forever be Lizzie Spaulding from Guiding Light for me). The show premieres Wednesday, October 10 @10/9c on ABC.

That is it for the shows I’m most looking forward to. Be sure to check out the schedule for premiere dates of all returning and new shows.