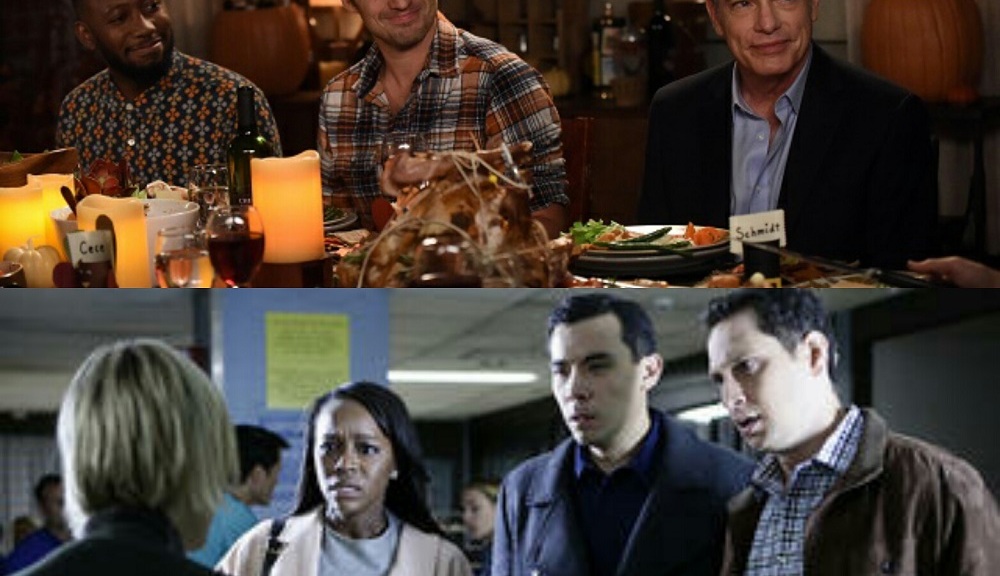 In this episode, Drew and I chat about season six of Fox’s New Girl and season three of ABC’s How To Get Away With Murder. We also discuss what we’re currently watching and what midseason series we’re looking forward to.

Listen on iTunes and Soundcloud.

ABC went into its upfront presentation today in the same place it has been for the last couple of years, in fourth place. While their percentage of viewer decline has been way less than that of the other networks, they still can’t catch a break as all their new dramas and comedies have failed terribly and not even Shonda Rhimes can save them. Their biggest problems are Tuesdays, Thursdays at 8 pm and Sundays at 11 pm and it doesn’t really seem like they tried to change much on the schedule. The biggest change occurs on Tuesday and Thursday. They moved their comedy block an hour earlier on Tuesdays to start the night off. That’s good as it won’t have to go up against FOX’s comedy hour at 9 pm. They moved The Goldbergs to the time slot it should have been in from the beginning, after The Middle. Maybe if they had done that last fall, along with giving Trophy Wife the post Modern Family slot, that show wouldn’t have sunk the way it did. Yes, I’m a little bitter. See here and here. They have also done what I figured they were going to on Thursdays and just made it a Shonda Rhimes night of television. Moving Grey’s Anatomy to 8 pm is definitely going to be a huge challenge as it will be going up against the highest rated comedy on television, The Big Bang Theory. That show could put a huge dent into the ratings of ABC’s highest rated drama. They also moved Scandal to the 9 pm hour which I think would have worked except NBC will be moving The Blacklist to that time slot making it a very competitive hour. For Sunday they finally did what they should have done two years ago, which was move Revenge back to it’s 10 pm time slot. Check out all of these changes in the new Fall 2014 schedule. END_OF_DOCUMENT_TOKEN_TO_BE_REPLACED

This is a great thing. This will give the writers time to tighten up the story and not have to do so much filler. This will also give Kerry plenty of time off from when she has her baby till the start of season 4 production. I think 18 episodes per season should be a permanent fix. Then they can start the season a little later like in October end it in December with the first 9 episodes having  aired then come back in February to finish up the final 9 with the season ending in late April.

Oh snap. Loveee Khandi Alexander. I can see why they cast her.

Yess love me some Lisa Kudrow. Ready to see her do more dramatic roles.

The holidays are here and all your shows are in reruns or got cancelled (I’ll miss you Emily Owens, M.D). I know you are pretty anxious for their return. Don’t fret, you can find the dates of every single show’s return date as well as new shows that will be premiering this Winter at the bottom of this post. Shows return as early today, the 1st of the year. Here are some the returning and new shows I’m looking forward to.

Keri Russell back on television?? YESSSSSSSSSSSSSSSSSSSSSS!!! And playing a bad ass?? Double YESSSSSSSSSSSSSSSSSSSS!!! FX has stepped up their game when it comes to their programming (Sons of Anarchy, Justified, It’s Always Sunny In Philadelphia,etc) and this show looks like it will be no exception. This show set in the Cold World era stars Keri Russell (Felicity, Mission Impossible 3) and Matthew Rhys (Brothers & Sisters, The Edge of Love) as KGB officers, who are working as sleeper agents trained to impersonate American citizens in Washington D.C. This is going to be great. Hopefully this show will do well and keep Russell on TV where she belongs.

Season 4 hasn’t been the best but it’s still been better than half the shows on television. This season we are in the middle of has been very hit and miss, mostly because everything is not in sync. The storyline with Kalinda (Archie Panjabi) and her husband, played by Marc Warren (Doctor Who, Mad Dogs) is one of the biggest missteps that has happened to this show. The show creators, Robert and Michelle King, told TV Guide recently, they are going to fix things. They stated:

“You don’t give James Bond a girlfriend. Some characters you actually don’t want to see that much backstory. We’re adjusting. No matter where we went, this was not a place where the audience wanted to go.”

Hopefully the ship gets righted with the rest of the season. Check out the promo for the next new episode, “Boom De Ya Da.”

END_OF_DOCUMENT_TOKEN_TO_BE_REPLACED

Partners – Right off the bat it looks just like Will & Grace, which I liked. Glad Brandon Routh has found some steady employment. I didn’t love the show but I liked it. It was consistent and has some laughs. I like Sophia Bush’s character. I feel like she is still playing Brooke from One Tree Hill though. Michael Urie is adorable. It looks like he is playing a less bitchy version of his character on Ugly Betty. We’ll see how the next episode goes.

The Mindy Project – Liked it.  Its funny and quirky (not Zooey Deschanel annoying quirky. I love New Girl but sometimes its just too much). The show wasn’t a slam dunk but it has great potential. Mindy Kaling is a great writer so I only see the show getting better. I thought the supporting characters were pretty good as well. This gets a season pass because I really like Kaling.

END_OF_DOCUMENT_TOKEN_TO_BE_REPLACED

8/7c – CBS – The Big Bang Theory – Season 6 Premiere. With his friends on dates, Raj must face his loneliness. Also, Wolowitz gets caught in an argument between Bernadette and his mom, even while he’s in space.

8/7c – ABC – Last Resort – Series Premiere. 500 feet beneath the ocean’s surface, the U.S. ballistic missile submarine Colorado receive their orders. Over a radio channel, designed only to be used if their homeland has been wiped out, they’re told to fire nuclear weapons at Pakistan. Captain Marcus Chaplin (Andre Braugher) demands confirmation of the orders only to be unceremoniously relieved of duty by the White House. XO Sam Kendal (Scott Speedman) finds himself suddenly in charge of the submarine and facing the same difficult decision. When he also refuses to fire without confirmation of the orders, the Colorado is targeted, fired upon, and hit. The submarine and its crew find themselves crippled on the ocean floor, declared rogue enemies of their own country. Now, with nowhere left to turn, Chaplin and Kendal take the sub on the run and bring the men and women of the Colorado to an exotic island. Here they will find refuge, romance and a chance at a new life, even as they try to clear their names and get home.

9/8c – ABC – Grey’s Anatomy – Season 9 Premiere. The doctors of Seattle Grace are faced with the aftermath of last season’s plane crash. As they try to move on with their lives, they must learn to adapt to the changes, cope with their losses and move forward with their relationships and careers.

9/8c – CBS – Person of Interest – Season 2 Premiere. With Finch missing – kidnapped by his hacker nemesis, Root, in last season’s finale cliffhanger – Reese enlists Detectives Carter and Fusco to get his friend back.

10/9c – CBS – Elementary – Series Premiere. Detective Sherlock Holmes, along with his sober companion, Dr. Joan Watson, uses his uncanny ability to read people and analyze crimes to aid the NYPD on some of their more difficult cases.

10/9c – ABC – Scandal – Season 2 Premiere. Quinn’s identity is finally revealed, and the more the Pope & Associates team learn about her past, the more they realize she could be their biggest scandal yet. Meanwhile, a senator seeks Olivia’s help when his personal life is about to become a public disgrace, and President Fitz is stuck between a rock and hard place when Mellie and Cyrus put him in a very compromising position during a live television interview.

If you have followed this blog for any amount of time, you know I love television. You also know I LOVE FALL TELEVISION. The air begins to cool down, Starbucks brings back their pumpkin spiced flavor and all of my favorites and potential favorites come back from their summer hiatus. It’s the most magical time ever.

So here I’m going to wax poetic on what returning shows I am looking forward to as well as what new ones I hope are as good as their trailers seem.

Season 5 is going to be amazing. Season 4 ended with the writers giving the fans what they have wanted for 4 long seasons and they definitely did not disappoint. Season 5 will start with the morning after of Castle and Beckett getting together as well as what happens with Esposito and Beckett after they quit the force. Hopefully we will get some mending of Ryan and Esposito’s friendship. Can’t wait for this one. The new season starts Monday, September 24 @10/9c on ABC.