The Golden Globes aired tonight on NBC and were hosted by The Tonight Show’s Jimmy Fallon. The big winner of the night was La La Land which walked away with a record 7 trophies which included Best Screenplay and Best Picture Comedy or Musical. In the TV categories, AMC’s The Night Manager surprising took the most awards (3) which included Best Limited Series or TV Movie. Atlanta and The Crown also took away big awards.

Take a look at the complete list of winners.

END_OF_DOCUMENT_TOKEN_TO_BE_REPLACED

In this episode, Tola and I chat about the Akils and Leslie Jones in TV news, season two of Lifetime’s UnReal and Netflix’s Stranger Things, and what we’re currently watching.

Listen on iTunes and Soundcloud.

True Blood alumna Anna Paquin is set to star opposite Sarah Gadon in Alias Grace, a six-hour miniseries on Netflix and the CBC.

Another San Diego Comic-Con came to an end this Sunday and it came with so much TV news and trailers. It seemed like TV was really the star of the con and for the first time overtook film at the big event. There were first looks at highly anticipated new series, teasers for upcoming seasons and news on some of our favorite long running series.  Take a look at all the trailers and enjoy.

FX’s series Legion is a new X-Men series from Marvel that had its coming out party at Comic-Com this weekend with the release of its first trailer. The series is an origin story of David Haller, who comic book fans know as the mutant Legion. The series will premiere some time in 2017.

END_OF_DOCUMENT_TOKEN_TO_BE_REPLACED

This has been nothing but amazing this year. Last night’s episode was… I don’t even have the words still for what last night’s episode was. I felt completely drained at the end and there are still 2 episodes left. If you have not checked out this show before (what are you waiting for) catch up on Netflix as all 5 seasons are on it.

Arrested Development – NetFlix – This show returns 7 years after being cancelled by FOX and becoming a cult favorite. For season 4, each new episode is written from one character’s point-of-view. All 15 episodes will take place within the same timeframe, each episode will focus on one character. Catch up with the Bluth family today when all 15 episodes are put on Netflix Instant Watch. 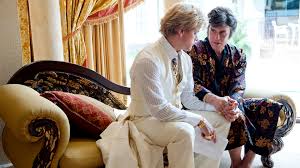 Behind The Candlelabra – HBO 9/8c – Starring Michael Douglas (Wall Street, Solitary Man), Matt Damon (The Bourne Series, We Bought A Zoo). The movie is a behind-the-scenes look at the relationship between entertainer Liberace and Scott Thorson, his younger live-in lover.

Why are they trying to bring back this show? The first season was good, the second not so much. Why do we need a 3rd?

Thank you its the weekend. I can sleep in and catch up on some shows and movies. But before it ends and the new week starts lets recaps some of the stories and events from movies and tv this week.

Lets start off with NBC. They released their mid-season schedule this week  and truly just said f*@% it to any kind of common sense. They have taken off Prime Suspect and Community and moved almost every show around. Whitney is moving to from its nice post Office spot to Wednesday nights at 8:30/7:30c. It will follow the new Chelsea Handler show, Are You There Chelsea (Vodka got taken out of the title because this is family hour). It makes sense to pair these 2 shows together but 8/7c family hour is definitely not the place. These shows are supposed to be rude and crude and make lots of sex jokes. Both of these shows would be way better on cable where there is more freedom to do all that not on broadcast television. Up All Night will be taking over Whitney’s spot on Thursday nights. 30 Rock will take over Community’s spot. NBC says the show isn’t cancelled but you have to wonder when it will return. Prime Suspect looks like it’s getting the ax. They say they haven’t made a decision but they already stopped production on the show and are shooting the final 13th episode next week so you tell me if that isn’t a decision. New show, The Firm, based on the John Grisham novel, will take over the slot. Here is the rest of NBC’s schedule.

ABC also unveiled their mid-season schedule and one of my favorite shows was notably missing from the lineup. CougarTown staring Friends alum, Courtney Cox Arquette (she might not be going with Arquette anymore; Kanye shrug) was not in the line up and this coupled with the mess that was NBC made me angry about the coming mid-season. The show will air sometime in March with a shorter season as the episode count been cut down to 15 instead of the 22 that were going to air. This isn’t a great sign for the show but hopefully when it does return people watch and the ratings go up because the show is quite hilarious.

Good news Arrested Development fans. The show is officially returning. There had already been an announcement about the show returning but it hadn’t found a home yet. This time it has. The series will be shown exclusively on Netflix starting in 2013. No word on if all the cast members will be returning  or if the long-awaited movie is going to happen but the show is back and that’s all that matters.

Ugh Twilight: Breaking Dawn pt 1 came out yesterday and is on track to make almost $140 million. It started off the weekend with midnight showings making over $30 million and $72 million total on Friday. It’s the 3rd biggest opening day ever behind Harry Potter and The Deadly Hallows: Part 2 and the second Twilight movie, New Moon. Everyone I know who has seen this is raving about it and saying it was actually really good. I don’t get it.  I watched the first one and that was awful and nothing ever convinced me to see any of the other ones. Kristen Stewart is also one of the worst actresses. Hell the whole main cast is pretty bad. Glad this is the end of this franchise because these kids are gonna disappear after this. Their movies that ventured out of the Twilight franchise have been less than spectacular and have not been seen by many so I look forward to the day I don’t have to see another Twilight ad or Kristen Stewart’s awkward and unsmiling face.

The trailer for a new Denzel Washington movie Safe House came out this week. The film stars also stars Ryan Reynolds and Vera Farmiga (with really bad hair). It’s about young CIA agent (Reynolds) who must watch a fugitive being held in a safe house (Washington). The house is attacked and they must work together run to get to a secure. Love Denzel and love Reynolds so I was already in without seeing the trailer but man when I saw it, I was in. I love when Denzel goes bad. Training Day was a great movie, I don’t think he should have won an Oscar for that but it was a great movie. Denzel plays bad so well. Why he didn’t do it more often I don’t know. The premise of this movie is not anything new. Its been done before but it definitely looks awesome and they use one of my fav songs from Kanye and Jay-Z’s Watch The Throne album that features the lovely Frank Ocean called “No Church in The Wild.” Good action, acting and eye candy what more can you ask for. The movie is in theaters February 2012.

Brad Pitt says he is going to be retiring from acting in 3 years. He did an interview this week with the UK version of 60 minutes. He said “I am really enjoying the producing side and development of stories and putting those pieces together. And getting stories to the plate that might have had a tougher time otherwise…” If I had read this in the late 90s or early 2000s, I would have been upset because Brad was making some wonderful movies at that time. Now I would say ok if he wants to I’m fine with that. The peak of his acting career has passed and while he still makes plenty of good movies, he could retire and not be missed. There are many younger actors that have taken the place that he held during the 90s when he was making hit movies and named People’s Sexiest Man. I would miss Pitt movies but I’d be ok just watching his old ones like Legends of The Fall, which is one of the best movies ever.